In addition to the everyday practices, PTI offers an extended “ACL add-on” that further teaches athletes how to safely absorb body mass and change direction without putting joints in compromising positions.

PTI has teamed up with SportsMetrics to become certified in the “prevention” of ACL knee injury (Note: No training can overcome the potential for extenuating circumstances). Our program begins with a testing process that will numerically give each athlete a risk assessment based on the inward and outward movement of the knees. After this assessment, a 6-12 week program is implemented, focusing on teaching the athlete how to take the pressure off of the knees and utilize their hips as their power center. Upon completion of the program, PTI trainers will reassess each athlete to determine their progress. 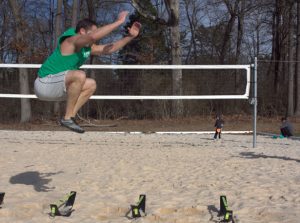 Wade Orloski began his training with Performance Training, Inc. in 2012. As a competitive volleyball player he suffered from several ankle injuries. He came wanting to increase his vertical and work on his stability in his ankles when landing from the repetitive jumping the game requires. While working with PTI he was able to gain 6” on his vertical, strengthen his ankle, learn how to properly jump and land as it applies to the sport. 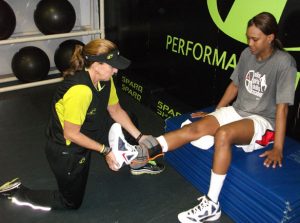 Tamika Catchings is an American retired professional basketball player. During her 15 year career Tamika accrued multiple awards, including the 2012 WNBA MVP as well as a 3 time USA Women’s Basketball Olympian. Tamika is seen rehabbing her knee during the off-season where she is doing stability and leg strengthening exercises on land along with dynamic exercises and deep water sprinting in the pool to download her pounding. 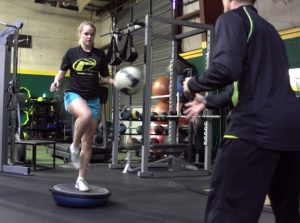 Kathryn Culhane began training with Performance Training, Inc. in 2011 after she suffered a torn ACL while playing competitive soccer. After being released from physical therapy she began her return to play training with PTI. To get her back on the playing field her training focused on soccer specific drills to increase her balance and stabilization, strength and precise change of direction. She fulfilled her dream of playing for the University of Tennessee where she has played three years most recently. 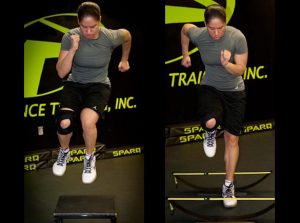 Kara Lawson is a retired professional women’s basketball player (WNBA) and sports analyst (ESPN). Formerly played for the Washington Mystics and is a USA Women’s Basketball Olympian. During her career Kara had knee surgery and trained in the off season with PTI to rehab her knee and gain her speed and strength back. Kara is seen dong an explosive jumping exercise, strength exercises and quickness drills.

ACL Injuries are one of the most common in sports. One of the leading causes of ACL/Knee injuries is improper movement patterns and a lack of functional strength. For our athletes we work tirelessly to train proper loading patterns and develop better body awareness to prevent forward shearing of the knee (a leading contributor to ACL injuries). In addition we at PTI have partnered with Sports Metrics to provide a full encompassing ACL/Knee injury prevention program. Starting from the ground up with risk assessment using 3D Motion Capture we can provide you an accurate score representing your likelihood of injury.

PTI, through its association with local orthopedists, has an integrated Return to Play program to help athletes who have become injured. PTI incorporates rehabilitation with strength and movement patterns specific to the sport to help an injured athlete return to his or her sport quickly and at a competitive level. Returning athletes to play is our main focus and goal. We progress each individual according to their tolerance of activities and physicians clearance.

Injuries don’t just happen to athletes on the field. They also can occur during every day life, and often at the worst possible time. Performance Training, Inc. offers a return to functionality program designed specifically around the needs of each individual, whether gaining back mobility after a shoulder replacement, or getting the strength to return to daily life.